A formula for figuring out what buying a whole pig by hanging weight may cost you. Or What happens to my brain at the end of the school week.

The pig has returned in little white packages and they are at their best. We sold one pig, so we only have one to eat. We ate some bacon. We ate some pork chops, and they were good, ‘strornary good. It is much more flavorful than what I’ve been occasionally buying at the warehouse store, (we all know what that’s code for)and much better than the ‘pork’ chop I bought on sale (cheap) at the grocery store last year. (It was bear, unless it was dog. Don’t ask me how I know, I just know.) But the big question is… “Was it cheaper?” Just because you produce food yourself it isn’t free, and in this economic climate, it isn’t cheaper either. It’s a little strange, but because of how we raise animals now and the cheap factory farming practices, you really can’t raise meat for less than you can buy it.Here are the un-entertaining facts for those of you who are considering purchasing or raising a pig.

If this sounds like math… it is, kinda sorta in a nerdy house wife way.

It cost us X to raise out the pig. The cut and wrap (Y) was an additional 68% of that number or X. That little bit of information is pretty much useless if you are planning on purchasing a hog from someone else, because presumably they are hoping to make a profit. The butchering and the cut and wrap was 41% of the total project. Let’s add X and Y together and call it P, for project, or for pig, or for psycho nerdy housewife. Then in that case Y= .4P The actual bring home weight of the beast was 70% of the hanging weight. Therefore, you should be able to develop a ball park number when you choose a hog to purchase. Basically, increase the price per pound of hanging weight by 70% to 75%. Let’s call ball park price B and hanging weight H. In that case (B= .7H+ H) The fatness or leanness of the beast will mess with the equation but it should give you a general idea. Let’s call general idea G and make up some more equations, just for fun, like a ninth grade Algebra book. Sometimes pigs are sold by the whole beast by people like us who have no clue of what they’re doing. You could do all sorts of fun equations and have no idea of what it will actually cost you, if you want.

My actual per pound number ended up being a little more expensive (by a little) than buying cheap cuts on sale or at the warehouse store, but cheaper (by a lot) than buying the same quality and cuts of meat at the grocery store.

Things outside the realm of Mathematical equations.

Having meat in the freezer helps me to plan menus more effectively, and means fewer, “I have no idea what’s for dinner let’s have daddy grab a pizza” nights. (You all have these too. It’s not just me, right??? Tell me I’m not alone.)

Knowing that our meat is not full of antibiotics is something that weighs into the equation for me. The pork industry has a history of overusing antibiotics, which stinks, because pork chops are the ultimate home fast food. Anything that gets to the table in under 15 minutes is a rock star in my kitchen.

Comments Off on A formula for figuring out what buying a whole pig by hanging weight may cost you. Or What happens to my brain at the end of the school week.

April to August has passed in a blur; will someone please slow down the train? I traded my goats babies for cold hard cash and have been drowning my guilt in glass after glass of rich raw goat milk. The doeling went to her mother’s previous owner and the boys found new homes as weed eaters. Here’s hoping for a better boy to girl ratio next year. It might be better to dam raise the boys next year. Goat roast would be a hurdle, goat roast that we bottle fed might be an insurmountable hurdle. 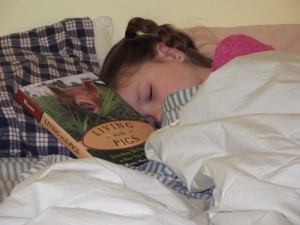 Elora has been fascinated by pigs for a couple years. We admit to encouraging it. If your daughter asks you for a pig will you give her a Barbie? It’s hard to say no when your child’s desires are in accordance to your own. (I think there is a spiritual lesson there…)

The pigs are named Boston and Bacon, the theory is that if we keep reminding ourselves of the pig’s purpose in life eating them won’t be too traumatic. Truly it would be best to not endow them with names- they are quite personable- and names only add more projected personality. This is our first project of deliberately planned meat. More on this later, when my brain is working better.

Comments Off on Boston and Bacon